A reference implementation of the ctx protocol is provided as a single header library, ctx header/library. Interactive Applications written using the C library can run either inside the ctx terminal, or stand-alone using SDL2, fbdev/KMS or in-terminal unicode quads/sextants/ascii as output.

To experiment with ctx, the demo clients included in the source repository is the easiest route, to build the clients as well as the ctx terminal do:

The clients folder contains demo programs and scripts for the terminal.

Running directly with the SDL2 or framebuffer backends has higher performance than going through the terminal abstraction, reducing this gap through tuning and refactoring is a work in progress, for applications the difference between 12fps and 120fps is smaller and small rather than global updates are done.

HTML5 canvas 2D context
Easily bindable C API and protocol building on this standard, along with extensions from SVG. Compositing and blending is according to compositing and blending level 2; ctx goes further than the standard and permits all blending modes to be combined with all compositing modes.
backends: ctx, linux/openbsd KMS, linux/netbsd framebuffer, SDL2, braille
ctx comes with 5 interactive backends, the ctx backend renders the ctx protocol to stdout, and reads input, this provides the client interface for interactive vector clients running in the ctx terminal.
DRM and fbdev backend takes take keyboard input from stdin and tries to read mouse events are from /dev/input/mice. The SDL2 backend permits using ctx clients under wayland/X11 and probably other platforms.
RGB and CMYK, 8pc and 32bit floating point
Supporting RGB332, RGB565 and grayscale + 1bit mode render targets. ICC based color management of RGB user/device spaces through babl as an optional dependency. CMYK colors can be generated on the fly from RGB or set and retained in CMYK mode - when set in CMYK mode the colors correspond directly to the device colors in CMYK mode.

deferred rendering
These drawlist representations are used for scanline/chunk-based rendering on microcontrollers where framebuffer is to large to fit in RAM and tiles and threaded rendering on multi-core systems with SDL2 and /dev/fb0 backends and network transparent rendering inside ctx terminal. Another way to drive larger than RAM is to re-render the frame for each segment instead of buffering it, buffering is however useful when doing networked rendering, ctx can be configured and adapted to deal with a wide range of scenarios. .
text rendering
Three font loading backends, stb_truetype, native-ctx and ctx-fs. The ctx.h header ships with a built-in native-ctx font. In following screenshot a text-file with the commands for the @ glyph is being edited in vim, with instant update across all clients. This massively slows down the UI but not enough to be unusuable. With a simple visual vector editor working directly with the ctx-protocol this provides for an almost complete live font-editor. 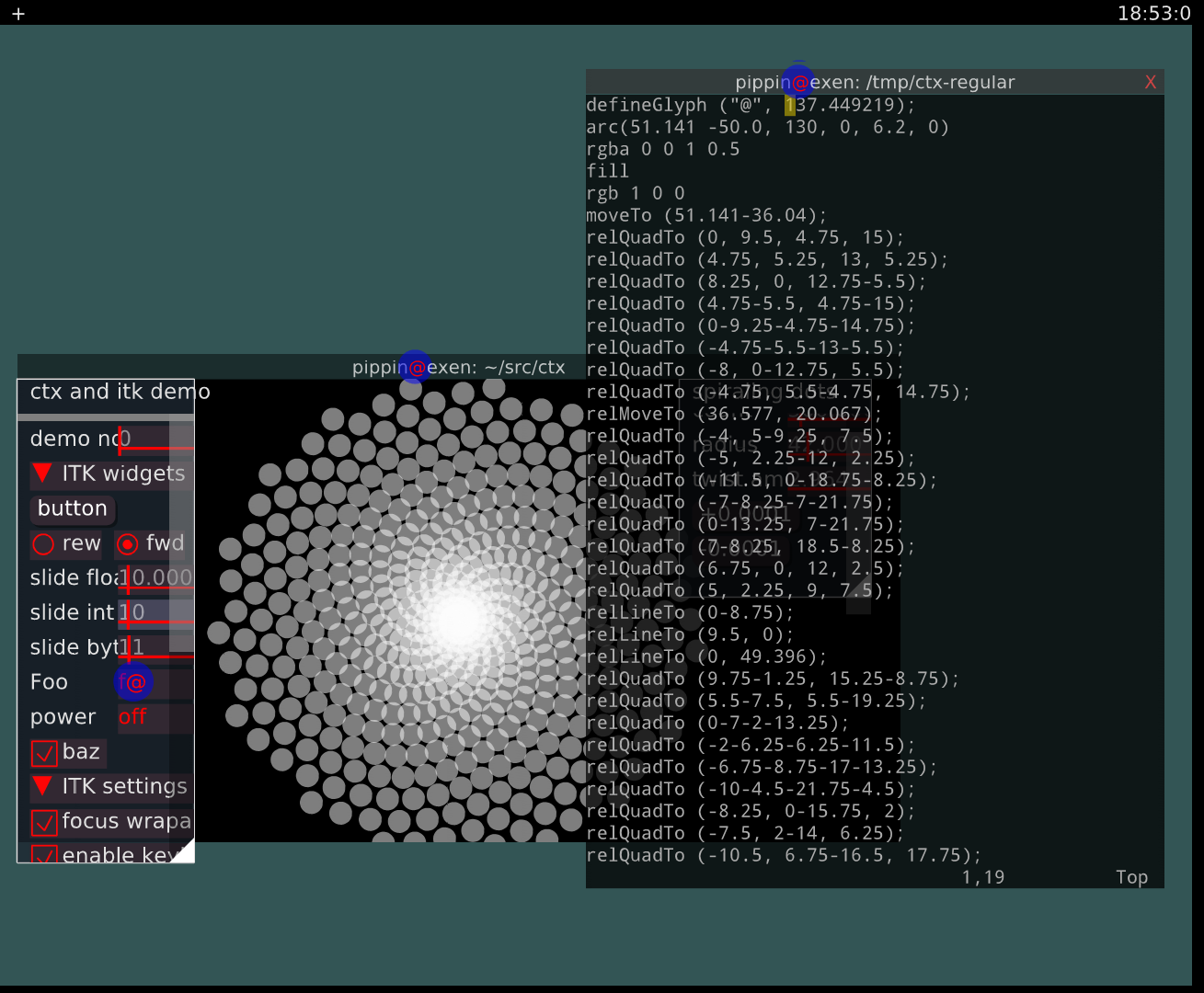 The single header and static binaries for download are autogenerated together with this website each time the git repository is synched.

CTX_THREADS
The number of rendering threads to use, defaults to number of cores.
CTX_TERM_MODE
Controls the characters used for drawing in CTX_BACKEND=term mode, possible values:

CTX_TERM_FORCE_FULL
if set to non 0/no always send the full frame instead of optimizing for lower bandwidth usage - should noe be needed apart for debugging.
CTX_DAMAGE_CONTROL
Visualize which cached pixels are pushed to display
CTX_HASH_CACHE
if set to 0 turns off the hash cache - this means that the full frame is rerendered every time, useful to verify if bugs involving non-updating bits of the screen is related to incompleteness of hashing.
CTX_SHAPE_CACHE
if set to 0 turns off the shape caching.

There is a corresponding binary encoding, considered to be an implementation detail of any given configured build, not a binary exchange format. Where the commands and their arguments are broken down into 9 byte long chunks, where the first byte is the short-form from the table above and parameters are encoded.

The current status of ctx is beyond proof of concept - but still does not fully realize a minimal system demonstrating it's capabilities - some features are also broken and need repair - and for third party use probably more urgently than the following wishlist. When this list is nearing 0 it is time for a tarball/versioned release of ctx. The single header ctx.h linked from this page is a rolling release.